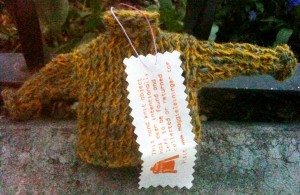 On Wednesday, May 5, 2010 the first Found Object was placed in the public square within the Old Town district of Albuquerque, NM.  While some colleagues have commented that it would be difficult to part with the sweaters, I found it exhilarating to place this object for collection, especially since the space was surrounded by commercialized consumption of culture, i.e. “gift shops”. While others were trying to hawk their wares of inspired Native American inspiration (half of which produced in countries like India and China), I was able to provide someone with a genuine hand made object void of the consumer market.  Having said that,  I am aware that there were some amazing fine works of art produced using very traditional and cultural practices that were quite exquisite. I only wish that those well deserving artists who are honestly attempting to support their family were receiving a higher proportion of the sales of the art.