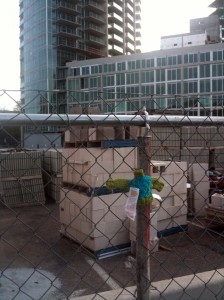 This sweater was placed in downtown Tempe at a construction site that has been dead quiet since the fall of the market in 2007.  How ironic that this structure has been stalled in financial turmoil while people nearby this location wander the streets with shopping carts loaded with personal possessions.  The juxtaposition of these two characteristics in Tempe, the homeless and the upper scale wanna-be urbanite, is playing out in cities and towns across the U.S. as the recession still impacts developments currently in progress of being built and others that were scheduled to break ground by now.  How much longer will the greed of real estate developers be supported by federal bail-out money given to banks to write off these bad debts to stabilize the market?  It will be interesting to see how the revamping of lending services will affect larger market developers in the future from stripping the mid-wage worker of their tax dollars to support a ballooning out of control market based consumption model.