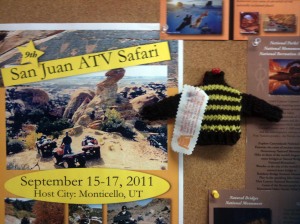 This sweater was placed in the southeast portion of Utah at a great little welcome center that overlooked wide plains of  grassland facing east and large mountain ranges in the west. The historical center also provided visitors with the valuable information of the Ute Native American tribe that fought and persevered against the American soldiers and settlers of the late 1800’s.  One patriarch of the Ute tribe lived to be 107 years of age and not only fought the American soldiers, but also brought peace to the area by signing a treaty that allowed the Ute people to retain a portion of their native lands.  During the time of conflict, many Ute hid in caves of the sandstone mountains that border the area.  Home for these people was more than just a structure, but a connection to a place.  The history provided did not provide the visitor with any information regarding the settlement agreement, but I couldn’t help wonder if the Ute tribe were able to maintain the land that they wanted and/or needed to maintain their cultural heritage, or if the U.S. Army managed to take the prime real estate and leave the tribe with the bleakest, non-agricultural portion of land as I gazed upon the open plains imagining wild buffalo roaming about.