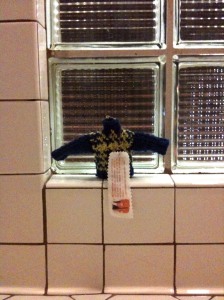 This was a really interesting placement.  Traveling southbound on I-17, we stopped at a rest area. Despite the lateness of the night, the emanating heat of the desert was oppressive.  As I was wandering around searching for a place for this sweater, I noticed a person sitting on the opposite side of this window with a bicycle and a backpack.  In his hands was a styrofoam container of food that was rapidly disappearing.  While it is difficult to say what the specifics of this situation actually was, it became clear that with no roads in close proximity that this gentleman had a long, difficult journey ahead of him, most of which would be at the mercy of others providing a ride down the hill into the desert.  And, of course, as often happens with placing these sweaters, I become all too aware of the trials and tribulations of others and became very thankful that while we had been on the road for 5 days, that I had a bed to rest upon that evening.