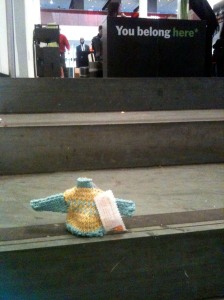 I guess I can now boast that I had work in the Museum of Modern Art in New York, but believe me the intention of placing the sweater where I did reflects more upon challenging the art world economy than to become a part of the hierarchical nature of exhibition, recognition and monetary cycle of art production. Earlier in the day, a presenter at the conference I attended compared visits to specialized museums including the National Museum of Women and the Arts, National Museum of American Indian, National Museum of African Art, American Visionary Art Museum and the National Museum of Art. He posed a question to one of the docents at the National Museum of Art asking if there were any works of art completed by women in the museum.  The docent, who was an older white gentleman, answered that he didn’t know and told the presenter to just check the label stating the name of the artist. Then, the gentleman reflected and answered that he thought that there might be some paintings by Alfred Stieglitz’s wife in one of the galleries, but he wasn’t sure.  As an artist who is a woman, and one who looks back on those who have made my path easier as a practicing artist, I was shocked and appalled. In my bubble, we are all equal. And as I was walking towards the entrance of MoMa, with the crowds going around the city block to view an iconic male artist from the 50’s and 60’s, I physically revolted, becoming nauseous as I approached.  I had a free entrance into the museum and a great opportunity to view some of the artists whom I have come to admire, both men and women, but on that night, I couldn’t stomach the Wal-Mart effect of mob adoration of one who has been deemed worthy by the art world. So, in homage to Mierle Laderman Ukeles who mopped the floor on her hands and knees of various art institutions, I placed a sweater on the floor.  And, it is no coincidence that the text from the museum table soliciting membership is in the background. To me, it reads that only some people belong, and obviously we know who those are and it isn’t us.